Posted on December 20, 2011 by deluxe│mixology

Kevin and I both had a great time rockin’ our sweaters (reindeer and Christmas trees along with a Buddy the Elf hat) and mingling with the local talent. Bartenders came from all venues including Nobu, the Hilton, Prohibition, Nicky Rotten’s, and Snake Oil Cocktail Co. We also got to meet Monetta Ennis, the area sales manager from Karlsson’s Vodka which I enjoyed because I was interested in what Karlsson’s was about and she was more than happy to share all about the company.

As it turns out, Karlsson’s takes the flavorless aspect of vodka and turns it on its head. Rather than producing a neutral spirit, Master Blender Borje Karlsson created a recipe that showcased Sweden’s famous staple in the form of a hand-made blend of seven varieties of virgin potatoes from the exclusive Cape Bjäre in the south of Sweden. The vodka is carefully distilled once (not the usual 6 or 7 times), in an unfiltered process that keeps the characteristics and flavors of the unique ingredients. What you get is a vodka with natural, not neutral, taste and quite a different vodka experience. 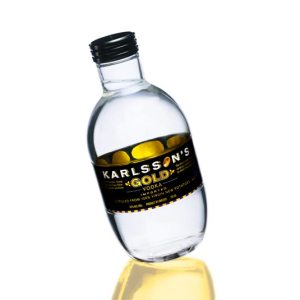 I tried it so I could witness how Karlsson’s was different. First in a punch, then on the rocks and lastly as a shot. The punch was tasty and didn’t leave much room to experience the vodka. However, when I drank it on the rocks I was met with a smooth alcohol and an earthy, potato flavor that added a richness and depth to an otherwise bland spirit. The shot went down easily enough but as this is a sipping vodka I’d try to stay away from shooting it unless the party is really bad.

Definitely liked the flavor as it opens up unlimited combinations of drink concoctions but  can also be enjoyed on its own.

Appetizers were made their way around as well, all of which were tasty. Overall the party was a sweet way to meet up with a bunch of San Diego barkeeps, try some great booze, and spread a little Christmas spirit (!) – bartender style. A special thanks to Karlsson’s for putting it on and thanks to the Guild for the Williams-Sonoma floating mulling spice ball.

Wishing everyone from the Guild, Karlsson’s Gold, and the Lincoln Room a very Merry Christmas and a Happy New Year!